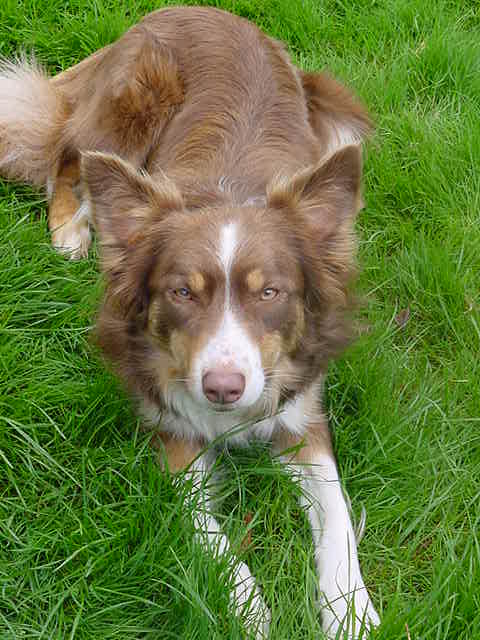 It is the one year anniversary today of my Darling Abbey Gail passing away.  I miss her dreadfully and it still feels like it was last week.  I saw her yesterday during an energy treatment…she visited with BJ.  She is still as beautiful as every. All my border collies and a couple of my LGD are sick  right now.   So right now I am thinking all about the dogs.  I think I have figured out what it is but don’t know if the damage is too extensive in a few to the point that they may die.

I have been feeding Taste of the Wild Dog Food and every time I get their digestion calmed down and start to re introduce the food, they get violently sick again. I have tried to re introduce their food twice and will not try again. I didn’t go from feeding raw or a bland diet to just their kibble, I did a small bit first for two days and that was all it took last time. This time I did small bit two days and they seemed OK but on the third day I gave them only their TOTW dog food but in a smaller amount than normal and the hell started again. Mucous and bleeding from their bums. Throwing up and total loss of control. I am at a loss.

I have sick dogs for 3 weeks and they have been to the vet and I have called numerous times. I decided to try some holistic things and started with pumpkin which cleared the diarrhea up so fast it made my head spin.  I gave them that with yogurt and kefir to fix the bacteria in their gut. I can’t feed raw with 3 giant breed dogs AND the border collies as I don’t have enough freezers or money to fill them.

Last night about midnight, I did a search on the internet for Taste of the Wild Dog Food + sick dogs.  OMG.  The reviews that have popped up all over about how sick dogs that have been eating this food have been in March, April and May of 2017 is staggering.  Taste of the Wild Dog Food is made my Diamond Food Company.  They also make Kirkland dog food in Costco and Nature’s Domain, which is the grain free formulas also available at Costco.

I found one site Consumers Affairs that had a lot of details and information  about the reaction of the dogs to the Taste of the Wild Dog food.  The symptoms were scary as they were exact to what my dogs are going through.  Unfortunately the reviews that had the best details and information, were also the people that lost their dogs.  The dogs went from being healthy to in kidney and liver failure in 3-4 weeks and having to be either put down or dying in their owners arms.  My dogs have been sick for three weeks.  I have two in particular that have been bleeding and worse than others.  That is my Nutmeg and my Chloe.  I don’t know if they will survive.  I have called my vet office and they are checking to see if they want to repeat the blood work tests and compare them to the ones already done for Nutmeg and Chloe.  I don’t know if there is any course of action as the damage is already done.

I have been researching and found some companies that do HUMAN GRADE food in a human grade facility made in the USA and it is dehydrated food. You add warm water and stir and give them it 3 minutes later. They have both regular formulas and grain free. The regular ones that have grain are cheaper so I might be able to afford it if I stop eating myself!! The grains they use are barley and oats. There is NEVER wheat, soy, corn or any GMO in it. I am going to try it.   The Honest Kitchen is the food.  Take a look at it yourself and see if you like it.

I have been talking to the vet at Diamond and she has had no issues with the batches of dog food I have had. If it is the dog food, I am the only one with those issues with those production batches. I gave her codes on like 11 bags. She recommended Metronidazole for them before I even told her that one had a confirmed positive test for Giardia. but we did 5 days in a row of heavy Panacur/safeguard granules for that per my vets instructions. After just one does of that panacur/safeguard I went from 1 dog with bloody diarrhea to 6 dogs with diarrhea although not all had blood in their poo. I called vet immediately and they insisted I keep on it. Five days of hell went on and still no slowing of the the poo. I was also advised to start cooking rice and boiled hamburger for them and did that from after that first dose. I have been doing that interspersed with chicken and sometimes a bit of oatmeal instead of rice right now….been doing that for 3.5 weeks. They are still sick.

Every time I get them mostly firm when I use a bit of pumpkin, I slowly start to reintroduce TOTW and they get sick all over again after either 2 or 3 doses of the food. I have tried this two times. The first time they were still having the bland diet along with a sprinkle of the TOTW and by two days into trying to blend in the TOTW they were right back into explosive poo. The second time we did sprinkle of TOTW for two days and by the third day were at only TOTW but in a much smaller dose. Still same thing, huge mucous and diarrhea and blood with some vomiting but not as much of the vomit. When there was vomiting it was full of mucous as well. I have given them yogurt and kefir most days to help them out with the good bacteria their gut. So now I am not sure if it is the food or not. I won’t be running out to get any new bags if you are wondering.

Vet at Diamond said that the bland diet with the rice gives a false sense of them being firmed up because the rice absorbs the excess water in the poo. That is logical.  Perhaps??  Pumpkin does as well and so does the oatmeal to an extent. Vet at Diamond thinks that they still have Giardia as the med prescribed for it does not work for that. Checked with a vet up in Ludington that I have used occasionally and they also said same med as the vet from Diamond. The other vet up in Ludington also said that Panacur/safeguard does NOT fix Giardia. I researched what meds to use for this and panacur/safeguard is NOT one for Giardia. My dogs have been through hell for nothing as well as are still contagious to me.  I have used a small forest of paper towel and so many vinyl exam gloves.  My hands are raw and cracked from washing them so much.  The house stinks like bleach from bleach power washing the floors and the food dishes and dog toys.  I have almost no dog beds or blankets left as have had to throw so many away.  I don’t know how much more any of us can take.

The vet from Diamond plans on paying for the vet visit for Chloe and Morag.  Those are the two she wanted seen today as they were both up all night with diarrhea.  She also said she would cover their meds.  She is considering covering the meds for the other 4 as well.  However, I feel that our vet should do the exam for these two and give us the meds for all of them no matter as the original med prescribed was incorrect.  I am going armed with receipts to show that I did buy the med for all the dogs as I got it for five form the feed store and 1 from the vet.  and that she should cover these vet visits as well.  Either way, I am not paying as I don’t have anything to pay with.  I am also going armed with receipts for over $200 alone for chicken, rice, oatmeal, hamburger, paper towel and trash bags to show her what this has cost us.  Unfortunately I don’t ahve receipts for the $45+ of laundry where i had to bleach wash all the rugs including 3 large sheep skins that are supposed to be dry cleaned only.  I am sure that bleach wash and dry shortened the life of those skin rugs considerably.  So we are off to the vet for now.  will have to see if this will work or not.

This site uses Akismet to reduce spam. Learn how your comment data is processed.